Located on both banks of the Mississippi River, Minneapolis is the largest city in the state of Minnesota, called the Land of 10 000 Lakes, which is believed to have the most golfers per capita. What is the connection? Hydrologic resources are a major aspect in evaluating whether the terrain is suitable for a golf course because the presence of significant water resources is mandatory for its maintenance. According to the local media KSTP, more than 650,000 people in Minnesota play golf at least once a year. Unfortunately, their numbers are steadily decreasing, as are those of golf courses. And this is where Minneapolis Riverfront Partnership comes in charge. 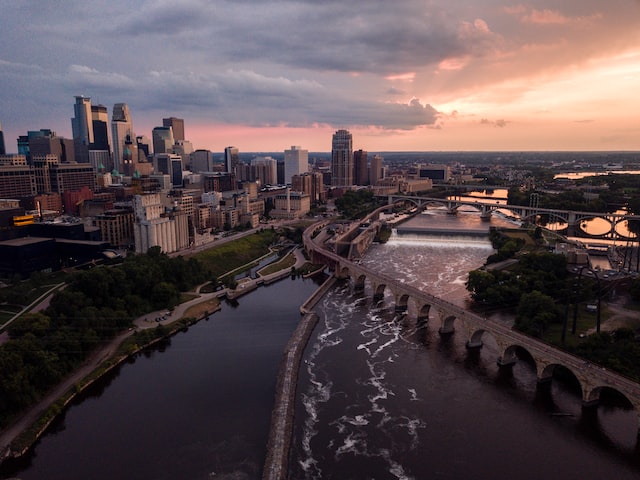 Minneapolis Riverfront Partnership is a state non-profit organization whose mission is to help revitalize the Mississippi Riverfront in Minneapolis. Although the organization’s activities cover the entire mandate, emphasis is placed on the area around St. Anthony’s Falls, as it is considered that the natural resource potential is not well used and has the least realized potential value. Therefore, the area is subject to significant redevelopment efforts. How did the idea of creating the organization appear?

While The Master Plan for the Upper River in Minneapolis was being developed in 2000, a study was conducted related to organizational changes that could facilitate the city government’s efforts to revitalize the waterfront in a more effective way. According to interagency studies, the most beneficial impact on the revitalization process would be the creation of a private, non-profit corporation whose role would be to build support in the community, local businesses, Minneapolis neighbourhoods, and private landowners.

As a result, in 2008, thanks to the combined efforts of the City of Minneapolis, the Minneapolis Park and Recreation Board, and the Minnesota State Legislature the Minneapolis Riverfront Partnership was established.

The main role of the organization is to bring together all interested communities and with their help to develop the area around the river and make it vital to the development of the economic, natural and social life of Minneapolis, which will be of great benefit to all residents of the city. To achieve the goal, we work in three main directions:

The Minneapolis Riverfront Partnership is clearly an organization that locals take very seriously. Why is it so important? After the French explored the region in the late 17th century, more and more people began to settle along the banks of the Mississippi. Minneapolis was founded in 1867. It is purposefully located on both banks of the river and its prosperity is due to the Mississippi River. For the importance of the river not only in the city but also in the entire state speak the names of the city and the state. Minneapolis means the city of water and Minnesota clear blue water.

The importance of the Minneapolis Riverfront Partnership is contained in the goals it sets and pursues. Here is a list of them.

The Minneapolis Riverfront Partnership has a specially prepared project called Riverfront Vitality Project, which represents the first serious look at Minneapolis’ Mississippi riverfront. Established in 2013, its purpose is to collect and analyze in-depth data on the current state of riverbanks. In this way, trends will emerge, which in turn will show how the revitalization of the riverfront is progressing with the participation of public and private investments.

The organization is essential to the development and future of not only Minneapolis, but all of Minnesota, as the city of water is the largest in the Land of 10,000 lakes. The economic, social, and even demographic development of the area around the Mississippi River is directly dependent on the condition and extent of the utilized potential value of its basin. Creating a sense of belonging to Minneapolis combined with sustainable development measures is key to solving the problem and perhaps maintaining Minnesota’s status as the state with the most golfers.